The Central Minnesota Manufacturers Association (CMMA) exists for the primary purpose of contributing to the growth and success of manufacturers. 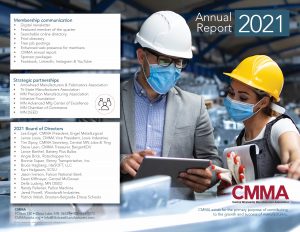 Recognizing the lack of a manufacturing voice in Central Minnesota, manufacturing leaders began exploring a partnership with Midwest Manufacturers Association in early 2006. They met several times throughout 2006 and 2007, laying the groundwork for the first ever CMMA meeting in January, 2008. Over 100 people from almost as many firms attended that initial early-morning meeting despite sub-zero temperatures! CMMA was born.

The number of members has surpassed 220 and is steadily growing. This growth and the energy found at the meetings suggests that CMMA is a valued grouping of similar interests and goals.

Board and Committees:  CMMA is governed by a volunteer board of directors. Members are invited to join a committee at any time, including: Programs, Government Relations, Marketing, Membership, Workforce, and Golf.  Contact the office to join. 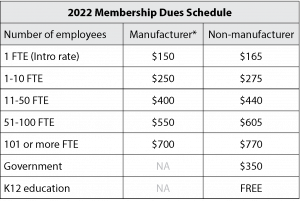 As a new member you will be invited to a New Member Onboarding session online. If you are unable to attend in person, please watch this previously recorded session.

Membership provides an option to lower your operating costs. Responding to your needs, we have carefully selected partners — vetted by our board and endorsed by fellow members — to provide a cost savings to your operation. Learn more. MBiz Solutions

Located in Elbow Lake, MN, Midwest Manufacturers’ Association is a “shared office” that provides services, programs and staffing to manufacturing trade associations. Members have particularly benefited from the Employer Health Plans and the other MBiz Solutions.

AMFA serves the Duluth, Superior and Arrowhead region. Meetings are held on the second Wednesday of the month.  AMFA-MN-WI.org